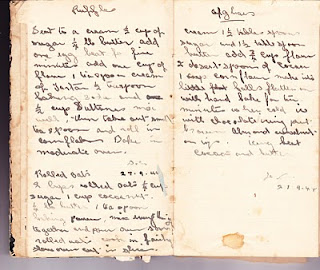 Whilst cleaning out some boxes in my garage recently, I came accross a small old address book. When I opened the well used little book, I was surprised to find that it contained, not addresses, but a collection of receipes written by my great aunt Dorothy, who was born in 1910 and died in 2001. I am not sure how the notebook came to be in my possesssion but as I read through the hand written recipes I noticed that my aunt had dated each one and in many cases written the name of the person from whom she had acquired the recipe.
Looking at the left slanted writing, I realised that I had never known that my great aunt was left handed like myself. When I got to know her well, she was a widow of advancing years who did little cooking. I did not ever sample the recipes in the litttle notebook, however, I can now imagine the dinner parties, that she must have hosted, being the wife of an army Major. Reading through her obviously much used, recipe book (food stains on a page are always the sign of a much loved and well used recipe), I realised that my aunt must have had an adventurous love of cooking. The recipes, which date from 1941 to 1975, were a collection of warm and hearty foods as well as quite exotic foods, many of which were boldly unusual for the 1940's and especially for the war years. This possibly reflected that great aunt Dorothy's husband Alexander had served in Malaysia and Japan in the Australian Army, during the second world war. Living in Asia, my great aunt had experienced new and interesting dishes which she herself cooked.
As well as dating the recipes, my great aunt had very kindly (for me) written where she was living at the time. I now have record of her whereabouts between 1941 and 1975 when the entries in the recipe book ceased. I did not know this aunt very well, since, for most of my life she lived either abroad or in a different state to myself. Through her recipe book and through her cooking, I feel that I am getting better acquainted with this interesting lady.
It was after watching the movie, Julie/Julia that my interest in blogging blossomed. I have always been an avid reader and writer however, it seems appropriate, now, that through a film about two women, years apart in age, who shared a love of cooking, one writing a French Cook book and the other younger woman blogging about the same book, that I am blogging about my great aunt, whose love of cooking shines through her own recipe book.
I want to discover, now, who was Sally Mann, who gave my great aunt a recipe for Ice Cream ( 17-6-46) when she lived in Sydney NSW. I am intrigued as to more about M Bishop, who passed on to my great aunt a recipe for Chocolate Pudding on July 7 1975 at Surfer's Paradise in Queensland. Sue Hing's recipe for glazed carrots was written in the little book 0n September, 9, 1960 in Taiping, Malaya (Malasia) along with other recipes from people in America. I can see a new journey for me ahead tracing the origins of these recipes. 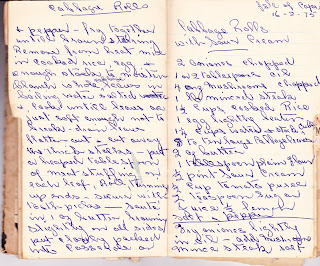 I am determined, also, to try to cook some of the recipes from the small note book where my aunt has left not only a legacy of delicious food for me to cook, but a narrative of her life and her friends. The first recipe that I have decided to attempt, is a Banana Queen Pudding dated, 6-11-1948, Sydney. It sounds scrumptious and I am certain that my family will love it.
Reading through this book of old recipes has brought back to me so many memories of foods lovingly cooked by my mother and grandmother.
I have found several recipes in this book which my great aunt must have passed on to my mother and which I still make today. It makes the dishes much more special to know where they came from.
Food always seems to conjure some special memories. memories of Christmases with special food lovingly and festively prepared. Memories of birthdays with decoratively iced cakes. My memories of my paternal grandmother are very much asssociated with her wonderful Irish dishes such as Irish Bap which was greatly appreciated by all of her grandchildren. Only two weeks ago, I kindly recived by mail from an aunt, some of this grandmother's most loved recipes, including that of her Irish Bap. I am planning to cook it soon, along with her delicious Caramel Custard and Vanilla Bean Ice-Cream, 'Paddington Heights' Pumpkin Scones and Scottish Shortbread, (a recipe given to her by her mother-in law from Glasgow Scotland). My family may have to join a gym or take up running, as I blaze a trail through my old family recipes but I have no doubt that through these lovingly cooked meals, delicious desserts and cakes and I am going to come to better know my ancestors. Move over Julie/Julia!
P.S. I'll let you know how I fair with the Banana Queen Pudding and I am going to get started straight away, on my own hand written recipe book to pass on to my children.