Following the success of her 2011 Australia Day Geneablogging Challenge,  Shelley, of Twigs of Yore has issued another exciting invitation to bloggers with Australian roots to celebrate Australia Day, 2012. Inspired by the words from our Australian National Anthem,  Advance Australia Fair, Shelley has put forth the title 'Wealth for Toil' as this year's geneablogging challenge. 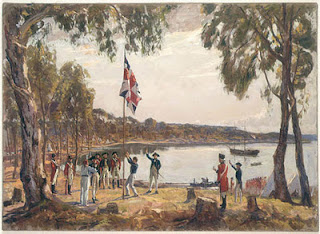 For anyone who does not live in Australia, this day is an official National Day in Australia, which commemorates the arrival of the First Fleet ( a fleet of 11 British Ships under the command of Captain Arthur Phillip) at Sydney Cove on January, 26, 1788 and the founding of an English Colony in Australia.  Australia day has now become a day also to recognise the indigenous people who lived in this great land of ours for many thousands of years before the arrival of the First Fleet.

This flourishing ' sunburnt' country known as Australia has been built on the back of immigrants and their  hard 'toil', rising from a land of trees, mountains, rivers and great hardship to become a prosperous nation. Australia as we know it today, is the result of the toil of our ancestors, be they convicts or marines who arrived on the First Fleet or the many immigrants who have landed on these shores since 1788, from all parts of the globe.

My ancestors in Australia include 4 convicts - 3 times great grandparents, (plus one great great great uncle who was a convict ) (Frayne, Williams, Kelly), a Prussian ancestor (Gottlieb Nerger) who was a Pioneer of Drayton, Toowoomba, and who died whilst  gold mining in Gympie, Qld. Gottlieb arrived in Australia in 1852 on board the Caesar Godeffroy. I have  a great great grandmother, Christiana Siegler,  who came to Australia in 1863 from Weurttemberg, Germany, Swiss g g g grandparents who sailed from Hamburg in 1871 to land in Maryborough, Queensland, (Jacob Häberling, a Bootmaker and Anna Ryser,who came to this country to make a better life for themselves  and their 5 daughters), as well as other English, Scottish and Irish ancestors (Weston, Morrison, Hoyes [via New Zealand], McDade, White).

Leaving the 'wealth' factor out of the equation, all of my ancestors toiled hard to make better lives for themselves - well, with the exception of one convict who, seemingly unwilling or unable to abandon his erring ways continued to rob, cheat and depend upon His Majesty's Prisons throughout his life in Australia. ( That crossed him off the list of contenders to write about immediately - little toil to speak of and definitely no wealth!))

I decided to write this post in dedication of my great great grandfather, John Morrison, who I believe was the ancestor who has left behind, the most tangible and important legacy of his hard toil and life in Australia.

John Morrison, my great great grandfather on my maternal side of the family tree, was born in 1847 in Aberdeenshire, Scotland to parents William and Elspeth Morrison. At some time prior to the age of 22 years, John moved to Northumberland in England where he met and married Hannah Tait Gair in South Shields, Durham in September of 1869. The 1871 English Census shows John's occupation to be a house carpenter in Newcastle on Tyne.

In December of 1878, John and Hannah Morrison arrived in Melbourne, Australia on board the ship 'Kent' with four children, Martha Ann (1870), Alice Jane (1872), Elizabeth (1874) and John William (1877). In 1879 a daughter Alexandrina was born to John and Hannah in Mortlake, Victoria. In this same year son, John William aged just one year, died of convulsions, sadly for the family.

The Sands Directory for 1883, lists John Morrison as a Builder, living in Burwood, Sydney, NSW. By this time two more children, George (1881) and Minnie (1883) had been born to the growing family.

John Morrison's talent as a builder was quickly recognised in Sydney, when in 1883, he won the tender for the contract to build an addition to St Andrew's Cathedral in George Street Sydney. This addition became known as Chapter House and stands today as a testimony to the dedication of my 2 times great grandfather to his profession as a master builder.

Tenders in the Sydney Morning Herald in 1884 which advertised for the delivery of 120,000 bricks and 100 tons of sand, as well as 900 perch of stone to the George Street site, demonstrate the size and importance of this construction which John Morrison, Building Contractor, was responsible for, under the direction of well known Sydney Architects Blacket Bros. 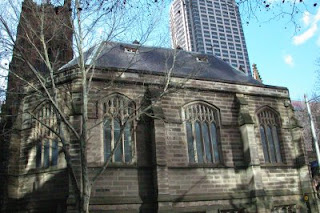 The years 1884 to 1889 were busy ones for John Morrison, Building Contractor. Advertisements in the Sydney Morning Herald show that he undertook many building projects including large villas and homes designed by prominent architects, in the Sydney suburbs of Manly, Woolich and Strathfield. Three more children were born to John and Hannah during this period, Florence (my great grandmother) (1885) and twins, John and Jessie (1887). Whilst Hannah was busy caring for a growing family, John's reputation as a fine building contractor was also growing and he built a number of fine churches in the Gothic tradition, designed by well known architects. These included the Presbyterian Church at Burwood and a large and beautiful stone Presbyterian Church, St Enochs at Newtown, designed by Blacket Bros Architects who were the sons of the well known colonial architect, Edmund Blacket. St Enoch's Church housed one of the two largest pipe organs in Australia. Unfortunately, in the 1960's with the uniting of the Presbyterian, Methodist and Congregational churches, St Enochs Church was demolished to make way for a housing estate. Few photographs of this very large church survive, however, the pipes from the organ have found their way into my local Anglican church of St John's in Beecroft, a reminder for me of the wealth of my 2 times great grandfather's toil as a builder of fine stone churches. Municipal buildings such as the Council Chambers at Strathfield were amongst other fine examples of John Morrison's pride in his work as a builder, and his significant contribution to the built heritage of the city of Sydney along with Chapter House, St Andrew's Cathedral.

In 1887, John Morrison owned a large parcel of land in Morwick Street, Burwood. Between the years 1889 and 1890, he opened a large Railway and Tram Carriage Works on this land situated close to Strathfield Station. The Sydney Morning Herald, Saturday, April, 19, 1890, revealed that 'the railway Commissioners yesterday took delivery of the second chain of railway carriages built by Mr John Morrison of Starthfield'.


John Morrison, builder, had responded to the exciting expansion of the railways in Australia and turned his hand to the construction of rail carriages as well as trams. The NSW State rail Museum situated at Thirlmere in NSW, has in its collection some working carriages built by my great great grandfather, John Morrison. Between 1889 and 1993 John Morrison was one of the six largest providers of rolling stock for the Australian Government. My great great grandfather had clearly become a very wealthy and prominent  man through his hard work and effort in building up several successful businesses in Australia.

John Morrison's wealth was more than monetary with six of his eight daughters training as nurses and his remaining son, John following him into the rail carriage business. Wealth of the prosperous kind, was not to last, however, in 1894, due to economic depression, the NSW Government was forced to cancelled a large order of 180 rail carriages  which were already under construction. John Morrison was forced to sell his home, his belongings and close his business. Adverisements for the auction of the Morrison family's possessions are evidence of the prosperity that John had worked for, ' exeedingly handsome modern, fine and substantial furniture and household effects, Dining, Drawing, breakfast and Bedroom Suites... Seven grand carpets, all bordered...Magnificent Overmantel and Mirrors, really splendid water colours by Huddlestone, Fletcher watson and other artists of great ability... two pianofortes..'

With whatever money was left, John purchased land in Cobar, NSW and headed north to the South Eastern Queensland town of Ipswich where he was employed as Railway Works Foreman in the Ipswich Carriage Workshop. John Morrison and his son, also employed by the SE Queensland Railways, remained in this position from 1900 for the next ten years, well respected for his expertise in the rail carriage industry.

In 1920 at the age of 73, John and Hannah Morrison moved to the Queensland town of Cooroy,where their eldest daughter, Martha was Matron of St Margaret's Private Hospital. It is believed that John helped his daughter to purchase the hospital. Daughters Elizabeth and Inez also nursed at this hospital.  (inland from Noosa). John became a shareholder in the Cooroy Butter Factory and continued to work in Cooroy until his death in 1927.

John and Hannah Morrison are on the official register of Pioneers of Cooroy.
John Morrison has left a legacy of his toil. Though a wealthy man in the mid 1890's, he died leaving little of monetary value. John Morrison, however,  left a wealth of evidence of his working life as a builder and as a carriage maker. His buildings stand proudly, displaying his craftmanship throughout Sydney and a number of his rail carriages have been restored and are used regularly by the State Rail Museum at Thirlmere. I myself, have stood inside Chapter house in George Street Sydney, and sat proudly in a rail carriage built by John Morrison and marvelled at the wealth of Australian heritage and history in the products of my great great grandfather's labour- the wealth of his toil.