A Beedle a Bellman and a Bard.

"Once more my muse in humble lays will sing" Edward Manton

I discovered that my 6th Great Grandfather, Edward Manton was a Poet through a Google Book Search

I knew, from the death record of my 6 x great grandfather, Edward Manton [1], that he was a Sexton in the parish of St Mary's, Islington, London. At the time of his death, on September 23, 1819, Edward was described as 'the late Sexton of this Parish'[1] .The death record of Edward Manton's wife in 1817[2], also provided confirmation of his occupation. It stated that Mary Manton [Morgan], of the parish of St Mary's Islington, was 'the Sexton's Wife'. 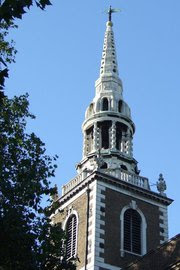 Having little knowledge of exactly what the role of a sexton was in late 18th century England, so I conducted some research online and at my local library. I discovered that the word sexton has its origins in Medieval times, and comes from the Latin word sacristanus, which translated, means custodian of sacred things. A sexton was, therefore, a church officer whose duties included supervising the maintainance of church buildings, grounds and the graveyard as well as keeping the records of baptisms, marriages and burials in the parish. In large parishes it was usual for the sexton to be an employee of the Church. Edward Manton was employed by the parish of St Mary's Islington. One can almost imagine him strolling through the beautiful church grounds and graveyard of St Mary's, pictured below right, intent upon his custodial duties. 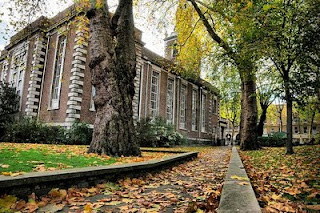 Right: The grounds of St Mary's Islington, where my 6 times great grandfather, Edward Manton would have walked whilst undertaking his parish duties, Image S White.


When researching my ancestors, I am always intent on finding more than just names and dates to add to the branches of my family tree. An important component of family history research is discovering and understanding as much as possible about the the lives of forebears.

Understanding the lives of ancestors involves researching the places where ancestors lived and significantly, knowing their occupations. This information reveals much about the social, economic and even political times in which ancestors lived and puts their lives into historical context. I find that I am able to feel more connected to my forebears when I am am able to place their lives within a real historical context.

When researching Edward Manton, my six times great grandfather, in addition to  searching for birth, baptism, marriage and death records, I researched his occupation. When I discovered that Edward was a sexton, I investigated the Church of St Mary's, Islington, where he worked, in order to discover as much as possible about his life. 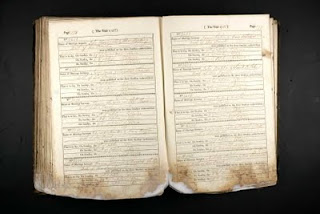 Edward Manton was baptised at the Anglican Church of Holy Sepulchre, Holborn, London, on April 10, 1755 [3]. His parents, Edward Manton (1720-1787) and Elizabeth Ellis (1730-1819)[3] baptised their son in a church with a very interesting history. Originally an early Saxon church, St Sepulchre [4] had undergone many extensive rebuilds (it was completely gutted in the great Fire of London in 1666) [3a] as well as renovations, by the time Edward Manton was baptised. It's main claim to fame, however, is that it was made famous in folklore. In the Nursery Rhyme, 'Oranges and Lemons', the great bell of St Sepulchre, became 'the bells of old Bailey' in the well known rhyme [4]. 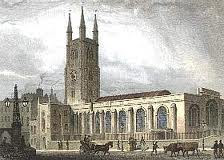 The foundation for this fame lay in the fact that
St Sepulchre's bell tolled as condemned prisoners passed by the church, on their way to their execution at Newgate. One of the duties of the clerk of St Sepulchre was to ring a hand bell outside the cell of a condemned man at midnight to mark the day of execution. I cannot help but wonder whether growing up in such an historically important parish, may have influenced Edward's decision to become a sexton in the Anglican Church, in his later life. In 1753, at St Katherine by the Tower, London, Edward Manton married Elizabeth Ellis [5]. St Katherine's was another historic church built beside the Tower of London, in Medieval times [6]. Pictured above is the Church of St Sepulchre.


Edward Manton and his wife Mary (Morgan) lived with their six daughters and one son, in Church Lane, Islington [7]. This lane no longer exists but once ran between Upper Street and Essex Road, beside the church of St Mary's. Church Lane is now known as St Mary's Path, part of which is now a footpath [8]. 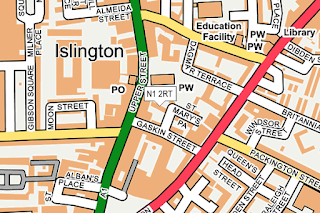 Edward Manton was clearly a man of deep religious conviction. He lived through times of great industrial and economic change in England and Europe. During the late 1780's and 1790's churches such as the Anglican and Methodist churches made a deliberate move to reach out to more people in an attempt to help bring about some stability in lives which were in turmoil [3a]. This is the political and economic background against which my 6 times great grandfather worked within the strict structure of the Church of England, as it strove to give hope to citizens searching for political, economic and social rights and for justice. This, then was the context within which my 6 times great grandparents and their seven children lived. And this is where I left my research, for some time.

Recently, a cousin who was travelling through out England, emailed to me, some photographs. She had visited the Church of St Mary's, Islington but discovered that no old records were held at the church. She informed me, however, that she had been felt quite emotional while walking through the church and grounds where our six times grandfather would have spent his days in the late 1700's and early 1800's.


I began to think about where I could look for more information about a sexton of St Mary's, and decided to begin with a google book search about St Mary's Church itself. When I extended my search to include the name Edward Manton, the following result almost took my breath away. 'A copy of verses humbly presented to all my worthy masters and mistresses in the parish of St Mary, Islington: by Edward Manton, Beadle and Bellman.' Author: Edward Manton, Publisher: London- Printed by T. Bayley (no. 120), Petticoat Lane,near Whitechapel: for the year 1791 [9].

I felt at once that this was Edward Manton, my 6 times great grandfather since the date of publishing was 1791, when I knew him to be a sexton in this parish. Having no idea what a beadle was, however, I conducted a google search and discovered that the term 'beadle' was an old word used by the Anglican church for non other than... a sexton. There was little likelihood of there being two men by the name of Edward Manton, who were sextons in the parish of St Mary's and so I knew I had made a fantastic new discovery. Edward Manton, sexton, beadle and bellman of St Mary's, Islington and my 6 times great grandfather, was also, a POET!

A further search of the title of this document, led me to the 18th Century Collections Online, on the website of the National Library of Australia [10]. Logging in with my member ID, I found that the original document is held by the Bodleian Library, Oxford. Then through a link, I found a copy of the original first page of Edward Manton's book of poems. Words cannot describe the emotions I felt, as I sat and gazed upon the writings of my ancestor. 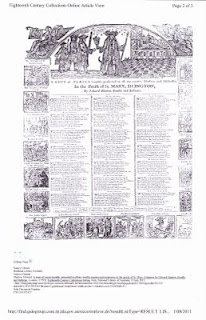 Right: Poems by Edward Manton. This original document is held in the Bodleian Library, Oxford.

9. A COPY of VERSES humbly presented to all my worthy Masters and Mistresses In the Parish of St MARY, ISLINGTON,' by Edward Manton, Beadle and Bellman, Google Books