The Diary of Frederick Watkins' journey from England to Australia 1885 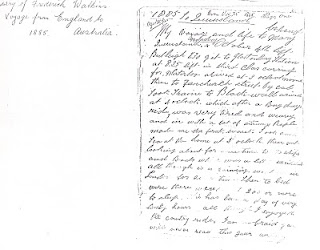 Diaries are an irreplaceable source of information about ancestors. Unfortunately, as far as I know, none of my own forebears were committed keepers of journals.

Today, in a bookstore, I found a bound copy of the diary written by Frederick Watkins. I purchased the document for $10. The first diary entry, pictured above, states that he was born on November 25, 1865 and is 21 years. The diary begins on October 4, 1885 and is a day by day account of this young man's trip from home, first by train and then the voyage by ship. The diary concludes at the end of Frederick's first day spent in Maryborough, Queensland.

I will post interesting pieces of Frederick Watkin's writing in my blogs as his words are a poignant insight into every part of the long voyage to Australia from sleeping, bathing, washing of clothes, discomforts, illness and the sights and experiences he lived through on his journey. Now, my challenge is to find out who Frederick Watkins was, and to perhaps trace some descendants who might be interested in the diary. This is 21 year old Frederick's first diary entry:

'1885 To Queensland Page one. [Born 25 Nov 1865 Aged 21 years] My Voyage and life to Maryborough Queensland x Monday October 4th Left Butleigh 7,30 to Glastonbury Station at 8.35 left in third class carriage for Waterloo arrived at 3 o'clock .....then to Fenchurch Street by cab Took train to Black-wall arrived at 4 o'clock which after a long day's ride was very tired and weary and in with a lot of strange people made me ..... [worse?] I took some tea at the home at 5 o'clock then out looking about for some time to the ships and boats which was a lot of excitement

all though it is raining we stayed in London for some time then to bed there were about 200 or more to sleep This has been a day of very lonely hours All though I enjoyed the country ride. I am afraid you will never read this queer writing' 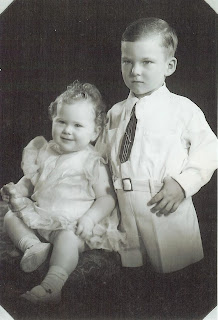 What's in a [Middle] Name? (Apologies to Shakespeare)
A Lighthearted look at Middle names


When you named your child, how did you choose a middle name for him or her? Whilst you spent hours happily perusing books of popular baby names, did you spare a thought for family historians of the future? Did you give the child an unusual or unique name, that would be easy for the genealogy enthusiast in your family, to find? 'Fessenden', for example shows up particularly well in a search of census records, and Verily Mary Christmas is quite an excellent choice for the electoral roll. Did you name the babe for your parents, or choose an old traditional family name? Perhaps you had a particular fondness for an aunt or uncle and named your child for them? I, myself, considered naming my first born after great aunt Esther Driscilla, in the hope that she might leave her vast riches to me in appreciation, however, I doubt that my son would have thought any amount of money could make up for being named Fergus Druscilla!

This blog is not named 'Monday Middle Names' just because it happens to be a Monday. There is a point to be made about awkward middle names and Mondays. I, for one, know what it is like to have the misfortune of being burdened with an unusual family middle name which, although may be a useful search tool for a family genealogist one day in years to come, has had a most unfortunate effect upon myself. In fact, I have been so traumatised by my own middle name that when it came to naming my children, I gave them all three names. Just in case they didn't like two of them! Well, except for my son, who has four and that was only because as I stepped up to the counter to register him, I panicked that he might not like the three names I had chosen and in a moment of madness added the name of the baby who had been ahead of me in the registry office queue. How do you tell your child that you named him after a perfect stranger in queue? In any case, Rahij is a lovely old Urdu name and goes well with Fergus, and I'm sure if I search hard enough amongst my Scottish, Irish and Swiss ancestors I will find an Urduan relative somewhere.

I was named after an aunt whose birthday I happen to share. If I had known that my appearance on that day would inevitably mean my sharing her middle name as well as her birthday, I might have timed my arrival better. Whenever I complained about the name as a child I was told to be proud of it since it was an old Scottish name. The middle name didn't really become such a big problem until I was at Bardon State School, when my second grade teacher, Mr Digby (I can't vouch for my spelling and you'll soon understand why) asked me if I was born on a Monday. At the tender age of 6, I knew that 'Mondays child is fair of face', and I was tempted to say 'yes', but because I was ' bonny and blithe and good and gay' I was also truthful. 'No Sir,' I replied, hoping he wouldn't be disappointed, 'I was born on a Sunday'.


Born on a Sunday?' a puzzled Mr Digby exclaimed. 'Why then is your middle name Monday?'
Why, oh why, did Mr Bigby want this conversation. Wasn't it bad enough just to have been given my horrible old Scottish middle name. Now I was going to have to tell entire class what it was. There was no escaping it. MrBigby was awaiting an answer. 'It's not Monday, Sir,' I squeaked, 'It's Monda.' I waited for the laughter, but no one laughed! Well, not until Mr Bigby continued, 'Well, you have been writing Monday for the past two years.' 'Sharna-Lee Monday MacDade, that's what you've been writing.' A curse on that name. Right at that very moment a bird flew into the classroom and pooped on my head. I can't recall which was most embarrassing, the fact that I had mis-spelled my middle name for 2 years or the bird poop! But the incident did nothing to endear my middle name to me. These days I don't so much mind having 'an old Scottish' middle name, however, in all of my research of Scottish ancestors, I have never come across the name Monda anywhere.

If you were particularly thoughtful of the future family historian, you perhaps followed the Scottish tradition of giving your offspring family surnames as middle names? My Scottish forebears were most helpful by giving their children middle names which were the maiden surnames of maternal mothers and grandmothers? My great grandparents gave their first four children the middle name Gibson. My great grandmother was a Gibson. Then came along my grandfather to be given the middle name Hamilton. If I had been a boy, I was to have the middle name Hamilton. Most of my cousins, male and female have the middle name of Hamilton. 'Who was a Hamilton?' I hear you ask. Well, as it turns out, he was the doctor in Cumbernauld, Scotland, who delivered my grandfather. They ran out of maternal surnames to use. Best to check who you are naming the children after. I'm sure Dr Hamilton was a lovely man. I hope so because generations later, a large number of my family are named after him. great grandmother, Elizabeth's sister was Margaret Campbell Gibson. She was named after their maternal grandmother Margaret Campbell. That's how it was with my Scottish ancestors. William Holme Cameron. Mother was a Holme. Wallace Dalkieth Morrison. His mother a Dalkieth. Too easy! Well, except for the Hamilton thing!

The English were quite fond of using surnames as middle names as well. The English, however tended to keep passing the same name down for many generations. Manton was the middle name which helped me to trace my Westons from Middlesex. I traced it back to the 1780's where I found the first Edward Weston, of many generations of Edward Westons, had maried an Elizabeth Manton. It's nice to know where your middle name comes from if it is an old family name. I should know! The middle names of ancestors such as Elizabeth Dixon Mallows, Rex Morley Hoyes, Alexander Gilmour McDade, Sarah Campbell McDairmid and James Berry Hoyes made the trail the trail of ancestors more easily identifyable. Recently I discovered that a friend's two ancestors were first cousins, because Emma Woodland married a James Woodland Searle. This middle name was a clue to solving a very old mystery in the family. Never under-estimate the importance of a middle name.

Naming traditions are not so much in fashion these days as they once were. This is possibly a good thing for some children who will no longer be weighed down with the burden of carrying Aunt Esmerelda's or Uncle Horrice's names into the future (or Monda). But it does make the job more difficult for genealogists in the years to come. How much more confusing will be the task for for the family historian as they try to trace names such as Addison, Maddison, Emerson, Harper, Taylor for girls and Hunter, Jackson, Franklin, Knox and MacArthur for boys, all very trendy but in most cases with no connection to family.

So, spare a thought for those who will be on the hunt for family in the future. Consider giving your children middle names which will make it easy to identify ancestors and relatives in records. From my own experience, I can promise you that your daughter, Grace will survive the childhood trauma of having the middle name of of Shuffelbottom if that happened to be your maiden surname. If you feel guilty about giving your child a middle name such as Long, Short, Humperdink, Butcher or Carbonara, just think of how much easier it will for them to be found one day in a census or on a school list. And like me, they can keep it to themselves until they are old enough to appreciate the significance of a 'family' name (unless, of course, Mr Bigby is still teaching). My son has my maiden surname as one of his [many] middle names. He doesn't use all of his names and I am the first to admit that perhaps I did overdo the middle name thing. But who can blame me. At least I am the only person on the Queensland School registers with the middle name of 'Monday'. At least, I will be easy to find one day.
Posted by Sharn White at 5:38 PM 2 comments: