There is no escaping the fact that bushranger Ned Kelly is an iconic part of the Australian historical narrative. Whether you think of him as a criminal or a victim of the times in which he lived, his story occupies an important place in Australian history.  Edward (Ned) Kelly, holds an undeniable fascination for every Australian and his story never fails to touch people in some way.

Paul O'Keefe, great great nephew of Steve Hart, (a member of the notorious Kelly gang), delivered an enthralling family story, which encompassed a tantalizing twist to the story of Ned Kelly's life, today at the Randwick Branch Library, in Sydney.

Some years ago, after finding papers and a scrapbook which belonged to his great great grandmother, Ettie (Esther) Hart, sister of bushranger, Steve Hart, Paul O'Keefe embarked on a research journey to discover truth in family anecdotes, and significantly, to provide the answer to a question which has long confused historians. Who was the real love of Ned Kelly's life? Paul O'Keefe's research offers convincing evidence that he has unearthed an illuminating new chapter in the real story of Ned Kelly. 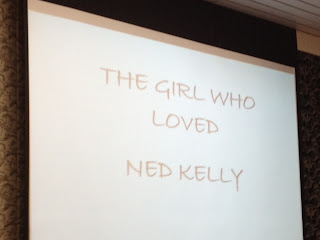 Although it has long been known that Ned Kelly had a close female friend, wife or lover, the actual identity of this woman has been the subject of much controversy.

Paul O'Keefe's narration had all the elements of a great story. It had a 'killer title' (no reflection on Ned) and without doubt, some of the most vivid characters in the history of Australia. The most exceptional element to this family and historically significant story, is the tremendous amount of thoroughly researched and documented evidence, which Paul presented orally and visually to illustrate his compelling proposal as to who really was the 'mystery' woman who loved Ned Kelly.

Paul's engaging and passionate talk captured and held the attention of the entire audience.  Paul told his story in a most entertaining manner with contagious enthusiasm, humour and passion. The extraordinary and dynamic visual images in the powerpoint display meaningfully illustrated the previously unknown story of Ned Kelly's lover. As Paul O'Keefe's intriguing  personal, but historically significant, story unfolded, the potency of his research along with the startling revelations he divulged, created a new and entirely plausible narrative regarding the love of Ned Kelly's life.

I am most grateful to Cassie and Ben Mercer of Inside History Magazine for the invitation to hear Paul O'Keefe's talk, entitled, 'The Girl Who Loved Ned Kelly'.  I am certain that fellow geneabloggers and family historians, Shauna Hicks and Jill Ball, who I sat with, as well as members of the Randwick Historical Society, will agree when I say that I felt as though we were all witnessing history!

This is a story of great substance and one which I am certain will attract much positive attention.