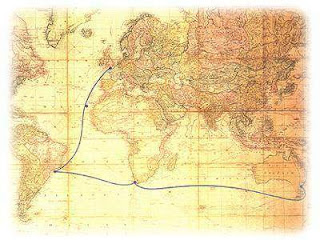 A Memorial Park for the First Fleet

This blog could well be named 'Travels of a Genealogist', since many of my blogs involve 'finds'  such as diaries, photographs and family heirlooms which I collect whilst travelling, mainly around Australia as well as overseas. On a return trip from Rockhampton to Sydney, a few years ago, I happened upon a wonderful Memorial Garden dedicated to the First Fleet. The Garden sits impressively in a park on the banks of the Quirindi Creek, in a small town called Wallabadah, approximately 60 km south of Tamworth and 359 km north of Sydney in New South Wales. Wallabadah is situated on the New England Highway and lies on the eastern rim of the Liverpool Plains. On the occasion when I discovered the Memorial Garden, I had only a short time to spend there, but I knew that I needed to return. Back in Sydney, I discussed the memorial with a friend of mine who had ancestors on the First, Second and Third Fleet. We both wondered why a memorial to the First Fleet would be situated so far from its landing place in Sydney. 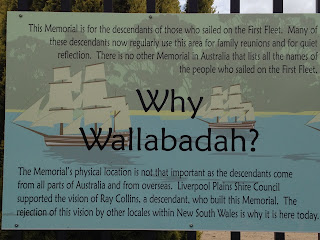 On this, my second visit to the pretty little town of Wallabadah, I was thrilled to discover that the Memorial Garden now has a memorial added, for the Second Fleet as well as the First. The concept for, and construction of a Memorial to the First Fleet were the result of the determination of a Sydney born man named Ray Collins. Ray grew up knowing nothing of his convict origins and, in fact, only discovered, as an adult, that his ancestor's name had been changed from Cross to Collins to obscure the family's convict ancestry. Ray subsequently discovered that he had convict ancestors who had arrived in Australia with the First and the Second Fleet.

Building a Memorial as a tribute to the first European settlers who arrived in Port Jackson, and upon who's toil and hardship, our country was founded, became a passion for Ray Collins. He spent several years researching the First Fleet, gathering names and details of every person  who sailed on the 11 ships which journeyed from England to the colony of Australia, arriving at Port Jackson on January 26 th 1788. The following ships made up the First Fleet of convict ships to arrive in Australia - HMS Sirius, HMS Supply, The Alexander, The Borrowdale, The Charlotte, The Fishburn, The Friendship, The Golden Grove, The Lady Penrhyn, The Prince of Wales and The Scarborough.

A stonemason by trade, Ray travelled throughout the country with his work, and everywhere he went he approached local councils with his idea of building a memorial to the First Fleet. After several years of consultation with  councils, the Liverpool Plains Shire Council approved Ray's concept and offered to sponsor the materials and equipment for Ray Collins to build the Memorial Garden. The First Fleet Memorial Garden transformed a hardly used caravan park into a colourful and informative historical monument and was officially opened on January 26, 2005. Ray Collins lovingly chiselled each and every name on each sandstone tablet which line the pathways winding between the 11 circular gardens, each representing one of the 11 ships of the First Fleet. Within each garden is a stone tablet bearing the name and a picture of the ship.

In 2009 the memorial to the Second Fleet was opened in the Garden at Wallabadah. The Second Fleet Garden is designed with two gardens surrounded by stone tablets which are arranged by ship.  Placed alongside the path throughout this section of the garden, are attractive, educational and informative signs.


A visit to the First Fleet Memorial Garden is well worthwhile, but  enough time needs to be allowed to read the many interpretive boards which provide a wealth of intriguing information. The main Information Panel in the southern end of the Garden displays lists of supplies carried on ships, what goods people took with them, (including a surgeon named George Worgen who even took a piano on board with him on the ship Sirius) in addition to fascinating anecdotes about each voyage- facts about the journeys, the perils faced, interaction with the native peoples of Australia when they arrived and much more. Even if you do not have ancestors who journeyed to the new Colony on these convict fleets, this information provides an enormous amount of insight into voyages in general to Australia in the late 1700's and is a significantly educational tribute to Australia's convict past.

The First Feet Memorial Garden deservedly won a Cultural Award in 2009 for the Liverpool Plains Shire Council, in the Cultural Infrastructure section Division 1.

As I walked through the Memorial Garden, I couldn't help but be impressed by the loving effort that Ray Collins had put into this tribute, not only to his own convict ancestors, but to remember all of those who journeyed to Australia on the first voyages. I decided, as my own tribute, to photograph every single tablet in the garden. The look on my husband's face when I announced my intention to do this was priceless! (there are a lot of names!) I cannot display all of these photographs here, however, if you or anyone you know have First or Second Fleet ancestors I will be pleased to pass on the photographs of the names of the ship on which they arrived as well as the tablet bearing their names.


Postscript:
Ray Collins' ancestor, John CROSS, was born in 1757 in Wiltshire, England, At the age of 29 years he was charged with stealing sheep and sentenced to 7 years transportation. John Cross arrived in Port Jackson in 1788 on board the ship The Alexander. John married Mary Davidson (or Davison) who was transported on the Lady Juliana and the couple had 9 children. John Cross died in 1824 and was buried at Windsor. His son, David was a Stonemason, who built the Victoria Inn which still stands at Wiseman's Ferry.

Further information about the First Fleet Memorial Garden can be found at: