'Do you spell it with a 'V' or a 'W'?' inquired the judge. 'That depends upon the taste and fancy of the speller, my Lord,' replied Sam.' Dickens


Paleography - Greek; noun; the study and interpretation of old and ancient writing

Here are some simple rules to help you interpret old documents

3. Use a magnifying glass to help read faded writing.

5. Keep in mind that original documents may contain spelling mistakes!


Recently I acquired a document written in 1760, which relates to the use of a property named Marwell Woodlocks (a manor estate later known as Marwell Hall, that my gre 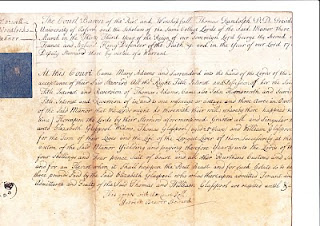 at uncle owned in the 1930's and 40's and which King Henry VIII had earlier presented to the Seymour family). The antique parchment paper and the flourishes and swirls of mid 18th century English handwriting undoubtedly added artistic charm to this document, but made it extremely difficult to read, as the style and form of penmanship was very different from any writing that we are used to reading today.

One of the most difficult tasks for the family historian, is to decipher old handwriting. Who of us, researching the lives of our ancestors, hasn't received a much anticipated marriage certificate, only to find, that we remain in ignorance of a further generation of forebears' names, because we can't understand the writing. Old writing is frustrating and impossible to avoid. Birth, death and marriage certificates, wills, parish and passenger records, were all handwritten (no word processors in the 'old' days). Generally, handwriting from the 18th century onward is not as difficult to interpret as it is on older documents where many of the lettering styles and forms differ significantly from those of today. To read and interpret old penmanship, (when 'writing' was an artform), you may require help. If your forebears happen to be of German or other European origins, the task of interpreting the handwriting may be even more arduous, as letters such as double s (ss) were written as ß or as a letter F. So if you have been searching in vain for your German or Swiss family of Bebers or Befers, you might like to reconsider that the name might be Besser, which in old German script would have been Beßer.

This doesn't mean that all budding genealogists need to rush off to enrol in paleography classes to learn to interpret ancient script, however, there are a number of excellent websites which offer free advice about deciphering old handwriting. The British National Archives offer an excellent free tutorial to help you to understand writing from 1500-1800, at the following link www.nationalarchives.gov.uk/paleography/ . Other useful websites are, www.cyndislist.com/handwriting.htm and http://www.genealogy.com/. By simply googling 'deciphering old handwriting' you will find a number of other useful websites to guide you through the process of transcribing your ancestors' beautifully scripted' but 'difficult to read' documents. It may be helpful to familiarise yourself with some of the most commonly misunderstood letters of the alphabet. 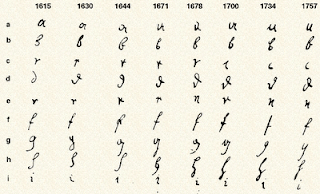 A simple confusion between a letter 'L' and an 'S' led me to believe for some years, that my three times grandfather, Michael Frayne, was an Irish lawyer. I was proud of all of my ancestors who had been deep in coal pits or working as agricultural labourers, but my 'ag labs' and all my ordinary folk dulled in comparison to my husband's ancestry. (He descends from Charlemagne, Alfred the Great, William the Conqueror, the Scottish McAlpin Kings.... ) So, against this backdrop, an Irish Lawyer was looking quite good! I am sure you can see where I am heading with this anecdote. Some years, (and much more experience) later, when I re-read Michael's daughter's birth certificate, my illustrious Irish grandfather suddenly fell from the social ladder, going from 'Lawyer' to 'Sawyer'. My disappointment, though real, was short lived however, as this discovery led to a much more exciting one when I realised that the date of arrival I had for him in Australia (1837), was too early for a free Irish immigrant. Michael Frayne was, excitingly (for me, though undoubtedly, not for him) a young Irish convict, the brother of notorious convict, Lawrence Frayne, whose memoirs of his time spent on Norfolk Island, are part of the Colonial Papers held in the NSW State Library. Robert Hughes dedicates a chapter to Lawrence Frayne, also, in his book 'The Fatal Shore'.

It was a happy ending for me, but a valuable lesson learned - paleography is an important tool for the genealogist!