Rootstech 16 Ambassador... and a Family Reunion thanks to Rootstech15.

Rootstech16 Ambassador - a look back at Rootstech15 and how Rootstech led to a family reunion...

I was thrilled to be invited recently, to join Jill Ball, previously the only Australian Ambassador for Rootstech Conferences, to be an Ambassador for Rootstech16. To say I am excited would be an understatement! I have my air ticket booked and paid for and my accomodation is booked as well.
In February of this year, I joined a fairly large contingency of Australian attendees, many of them, like myself, were genealogy bloggers and good friends, and we travelled the long journey from various parts of Australia to Salt Lake City in the USA, to attend the Rootstech15 Conference. The 2015 Rootstech conference was combined with the FGS conference so it was a doubly exciting year to choose for my first visit to Rootstech.

In addition to an exciting line up of keynote speakers (and a trip down memory lane with a fabulous rendition of Donny Osmond's Puppy Love  by the singer himself (showing my age now), an amazing and wide ranging choice of talks, engaging speakers to choose from and the wealth of knowledge  that I acquired, I met many friendly and like minded people. Some of these were already online friends from all around the world, whom I met at Rootstech for the first time in person. Others were new friends whom I am happy to say, I have stayed in touch with.

The exhibition hall was tremendously exciting with so many exhibitors and products to peruse. I'm afraid I purchased too many 'goodies' for my luggage allowance and no doubt I will do so again in 2016! Ancestry DNA tests were popular with Australian visitors and some Australians took tests in Salt Lake City and received our results before Ancestry's DNA testing even reached the shores of Australia!

The media hub in the Exhibition Hall was a constant hive of activity. Jill Ball called upon me to do an interview on camera. Amongst the many people Jill interviewed was young 15 year old genealogist, named Tas, who had heard about Rootstech from me and earned his airfair by busking, so that he could attend. His story even made the Deseret News!  I met Dear Myrtle (Pat) whose blog and more recentley, her hangouts, I have been a big fan of, in person in the media hub as well as Randy Seaver. Meeting in person, my online genealogy friends, was a great highlight of my Rootstech experience.

During a conversation ( naturally about family history) with Randy and his wife, it transpired that Linda had an ancestor who had lived in Sydney, Australia, where I happen to live. He had followed the Californian Gold Rush and I promised to look up the address of the hotel that Linda Seaver's ancestor had been the licencee of in the mid 1800's on my return to Australia. I did just that and wrote a blog post about my find. If you would like to read about Linda's ancestor just click on the link on the word blog above.

The family history library was one of the great highlights of my visit to Salt Lake City. After a most informative guide of the library, by most friendly helpers, I set about finding a great deal of information about my German and Swiss ancestors. The books in the library had me positively drooling! Luckily I speak German, as most of the books I was looking at, were in that language. I discovered information that I would not have discovered anywhere else and certainly I would not have found not online.

I left a few days free after the conference to explore Salt Lake City and to take hundreds of photographs of the city, which was picturesquely nestled in amongst snow capped mountains. 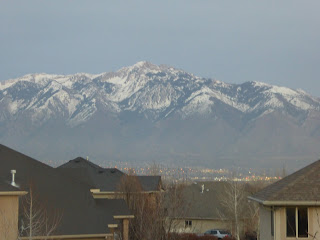 MEETING COUSINS
In February, since I was making the trip to Salt Lake City from Australia, I decided to continue on to Chicago after the conference, to meet, in person, many third cousins whom I had discovered through my family history research. My great grandfather, John MCDADE emigrated from Glasgow, Scotland to Brisbane in Queensland, Australia, while his younger sister, Agnes MCDADE, with her husband Martin LEONARD emigrated to Illinois in the USA in the early 1900's. Three generations later, I realised a dream to bring together a generation of cousins who had lost touch but with whom I had been corresponding daily via facebook for three years.

Six months later, in August, just a few weeks ago, I returned to Chicago, along with other Australian MCDADE descendants, for what my American cousins called "The Great Aussie Invasion". We had the most wonderful family gathering of MCDADE descendants and our American hosts were  the most amazing hosts. They are truly wonderful people. Despite three generations of separation, the MCDADE musicality and sense of humour has been passed down through family on both continents.
Had it not been for attending Rootstech15, I most likely would never have met my wonderful, awesome cousins. Below are some photographs of our family gathering in Chicago on August 31, 2015.

At Rootstech15, I met a speaker from Chicago, named Paul MILNER.  At a conference in Canberra, Australia, the very next month in March, I again heard Paul speak and was very impressed by his skill as a speaker. We became friends on facebook in March. In July of this year, I discovered in my FamilyTree DNA results, a cousin named Paul MILNER. You guessed it! Its the one and same Paul that I met at Rootstech15. We are corresponding trying to work out our connection, however, I am fairly confident that it is through family from Northumberland, England, on my maternal line that we are related.

I am very much looking forward to returning to Salt Lake City, in February, 2016, for the next Rootstech Conference. I will once again be returning to Chicago after the conference to visit my family in the USA and this time Paul Milner and I will meet up as well..... I am gathering cousins thanks to Rootstech... Rootstech16, here I come!  Why don't you join me.... its an experience you will never forget.