Thankyou to fellow geneablogger and friend "Geniaus" aka Jill Ball, for creating her wonderful end of year geneameme.     http://geniaus.blogspot.com.au/2012/12/accentuate-positive-2012-geneameme.html?showComment=1356837606560     In a year which has been extremely busy, but as always, genealogically exciting, Jill's genememe provides geneabloggers with an opportunity to look back on the genea- year and to reflect on our 2012 unearthings, detections, locations, authentications, experimentations, calculations and if fortunate, our verifications.  2012 has been an exceptionally significant year for me as my eldest daughter and her husband extended the family tree by one tiny beautiful baby branch! So here is my 2012 POSITIVE Geneameme! 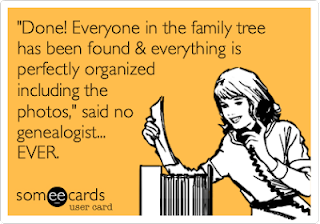 1. An elusive ancestor I found was Berthrum GAIR, also spelled Barthrum (which could have been a Latin spelling for his name). Berthrum was born in 1579, in Morpeth, Northumberland, England. My Gair line of ancestors had been resting with Roger Gair born in 1742 in Northumberland, for some years and it was only this year that I made a substantial breakthrough which led me on the trail of my 9 th great grandfather Berthrum, of whom I must say, I have become quite fond. In 1599, at the age of 20 years, Berthrum married Eliza LAWSONN. Berthrum was a Bailiff of Morpeth. He was a law enforcer similar to a sheriff and from records I have found through the National Archives, his duties would have included the enforcing of County Court judgements.

2. A precious family photo I found was a photograph of my great great grandfather, John Gottlieb NERGER. I discovered this photograph through a connection on Ancestry.com and this was a most exciting find because family anecdotes had reported that ALL photographs of my Swiss born g g grandmother Barbara Lena Häberling and her Australian born (from German parents) husband John NERGER were destroyed in a backyard bonfire after their deaths! NOT the kind of family tale one likes to hear. The surname NERGER was later changer to NARGAR to make it sound less German.

3. An ancestor's grave I found was a very exciting find. Although not actually the grave of an ancestor, the grave pictured below is of a tombstone erected by my convict great great uncle, Laurence FRAYNE on Norfolk Island in memory of his good friend and fellow convict, William Storey. Laurence (also spelled Lawrence) Frayne was the only convict to leave a detailed and well written account of the harsh punishment received by the Norfolk Island convicts. This document is held in the Colonial Papers in the Mitchell Library in Sydney.  Laurence Frayne disappeared from the Maitland area in 1846 and it is unknown what became of him. I would like to think that this man who was sentenced to 7 years in Dublin, Ireland for stealing a piece of rope at the age of 17 years and who repeatedly attempted to escape the harsh treatment he received in the Penal System in the Australian colonies, finally did escape to make a new identity for himself and to live out the rest of his life in peace. This grave is a most tangible reminder of my g g uncle's existence.

4. An important vital record I found was a record which I discovered in November of 2012 in the Queensland State Archives. A basic search for the name John NERGER, resulted in a find in the
Reformatory School for Boys Index, 1871-1906. To say I was surprised to find my two times great grandfather in a reformatory school record, would be an understatement, however, when I saw the actual document and performed further research, a story most distressing unfolded before my eyes. John Nerger, was sentenced to 5 years in the Brisbane 'reformatory school' for being 'Neglected'. He was 12 years old at the time of his sentence and the record stated that he had been in an orphanage. Since his mother had quickly remarried after the death of John's Prussian born father, Gottlieb Nerger, and had four more children, there seemed to be no explanation as to why my gentle great great grandfather, a breeder of prize canaries in his later life and a timber cutter, would have been placed in an orphanage. His full brother George, two years his junior was brought up with his mother, step father and half siblings. A much more distressing discovery awaited me as I researched the history of Westbrook Reformatory School and learned that at the time of young John's 'sentence', the school was an old convict hulk named the Prosperpine, which was moored in the Brisbane River. I found the heartbreaking to read the record which showed that John, spent a full 5 years on board this hulk. The positive side of this discovery is that I have a full description of my two times great grandfather as a 12 year old boy and now a great deal more fascinating research ahead of me as I endeavour to discover which orphanage he was placed in and at what age. 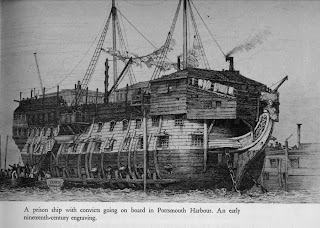 5. A newly found member who shared my family history was a third cousin who lives in Chicago, Illinois, USA. This cousin who descends from the youngest sister of my great grandfather, John MCDADE, from Glasgow, Scotland, contacted me through my blog. We are now firm friends on Facebook and I have also come to know, her siblings and another cousin who lives in another part of Illinois. Agnes McDade, their Great Grandmother, immigrated to America and lost contact with her brother, my great grandfather, John. We have come full circle now, exchanging photographs and family stories and discovering that we share similar personality traits, especially our sense of humour!

6. A genea surprise I received was whilst in Toowoomba recently and visiting the Toowoomba and Darling Downs Family History Society, I discovered that several of the very kind ladies who volunteer there, had found a newspaper item from 1864, which led me, with the help of old maps, to find the land which my three times great grandfather, Gottlieb NERGER purchased in 1860 in Drayton, Toowoomba. I had not known that he had owned a farm so this was exciting news indeed and as I was in the city of Toowoomba, Qld, I went in search of the land and walked upon it.

One other particularly exciting genealogical surprise for me in 2012, was having my blog FamilyHistory4u  named as one of the 50 top Genealogy Blogs in Inside History Magazine. Appreciation of the hours of research and writing which contributes to each and every blog is always a great thrill for me.

7. My 2012 blog posts that I was particularly proud of were two of the posts I wrote for the 2012 Family History Through the Alphabet Challenge composed by Cassmob (Pauleen). Two posts, in particular, challenged me to commit myself to some considerable research on topics which both interested me and about which I wanted to gain some insight into. These posts were, 'N for Negative Evidence' and 'R for Relationships - Confusing Cousins. Hopefully, through my blog posts, I helped to clear up a few misunderstandings for others and as for myself, I thoroughly enjoyed the challenge of the research and the writing.

8. My blog post that received a large number of hits or comments was, a post which I published on Jine 3, 2012, entitled, "Brick Wall Blunder - Cognomen Erratum". This particular post related to understanding records and avoiding mistakes. The topic of the cursed brick wall enticed around 20,000 views, which for my little  blog is something of a record. It was this post which inspired me to set up my Brick Walls Facebook page (which I must admit I have not had as much time as I would like to administer... so here's to more time for Brick Walls in 2013)

9. A genealogical tool I enjoyed using was my Flip Pal scanner. Oh the joy of seemlessly scanning large maps and documents which once upon a pre Flip Pal time I would have sticky taped together. I could do an advertisement for Flip Pal....I'm THAT impressed!

10. A genealogy conference from which I learned something from was - I always learn something from every single conference I attend! In 2012, there was more than one genealogy conference from which I came away with considerable new knowledge. One excellent conference was the 13th Australasian Heraldry and Genealogy Congress, held in Adelaide in March 2012. Apart from the enormous amount of fascinating of information I received (especially regarding forensic DNA - fabulous!) , I enjoyed a wonderful time with a fantastic group of 'beaded' geneabloggers, who are always happily visible at conferences bedecked in bright plastic genea beads! (Thanks to geniaus for those wonderful New Orleans beads. Plastic they may be but I treasure them!) The single most valuable thing I have discovered at genealogy conferences.congresses/fairs, is that there are many wonderful friendships to be made amongst the generous and enthusiastic people who attend these events in a shared pursuit for knowledge.

11. I taught a friend how to research her house history. I have completed a number of local house histories which will be appearing on the website of my local historical society and in their second book.

12.A genealogy book that taught me something new was ( there are too many to name here, but one stands out in my mind). Carole Riley published a book through Unlock the Past, the topic of which was Australian Land Records. I found her book to be an excellent source of information and extremely well illustrated and easy to understand.

13.It was exciting to finally meet and to put faces to many names I know so well online, ( please forgive me if I leave out your name as I met SO MANY of my online friends in 2012 that I am bound to leave someone out), Judy Webster, Helen V Smith, Kerry Farmer, Shauna Hicks, Alona Tester, Tanya Honey, Pauleen Cass, Kylie Willison, Chris Wright, Seonaid Theresa Harvey Lewis, Rosemary Koppitke,  Audrey Collins, Ben and Cassie Mercer, and many more. A very special day was spent in Adelaide with Judy Webster and Helen Smith when we journeyed together to the 'German' town of Hahndorf, near Adelaide, followed by an exceptional sunset coffee at Glenelg. Nothing to do with genealogy but a wonderful day to remember.

2012 was a very positive genealogy year for me. I made many exciting discoveries, I extended the branches of my family tree and that of my husband's. I visited the Ellis Island Immigration museum while I was in new York visiting my new grand daughter. I had the hair raising experience of  setting off from NY to Hyde Park on the wrong bus (a long story) ... in search of a large model of the yacht "Warrior" which sits in the Vanderbilt Mansion and which belonged to my great uncle in the 1930's AND I was rewarded with a private tour of the mansion AND a visit behind the scenes to actually see up close and photograph the model (not usually permitted). I found the land and graves of ancestors and visited these places and monuments. The most momentous 'find' for me in 2012, was the finding of third cousins ( I can work out the exact relationship now thanks to my blog!) who live in the state of Illinois in America. Despite that prior to 2012 none of us knew of each others' existence, we have now become firm friends on Facebook. We have shared family photographs and families stories.