Kelly's Handbook to The Titled, Landed and Official Classes

Kelly's Handbook to the Titled, Landed and Official Classes 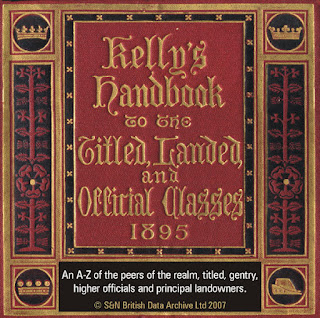 As family historians, we need to stay abreast of the continually expanding resources available to us both online and in books and  records in libraries and in archives. Occasionally you will be fortunate enough to find evidence of your ancestors in unexpected places, as I did, when searching for my great uncle Rex Morley Hoyes. I will relate my own experience with finding genealogical information in  Kelly's handbook before detailing a short history of this excellent family history resource.

Uncle Rex was one of my most fascinating but extremely elusive relatives, possibly because he was involved in a considerable number of either secret or 'not quite legal' activities. Much of my information concerning him was discovered in newspapers, where court cases he was involved in were reported. Suspected of bribery and corruption during World War 2, he and his wife's ( or wives 'names ) name frequented the London Times. Being a 'high roller' and an  unexplainable society figure in London, his wife's name appeared in the social columns regularly. especially when she was presented to the King and Queen of England. Rex was named in the London Times on occasions when he dined with Lord Mountbatten and attended horse racing events with other members nobility.   Rex's story of  intrigue continued throughout the press which informed of  activities such as when he became involved in illegal gun running to Hyderabad with Australian pilot Sidney Cotton in 1948.

In a google book search his name appeared in the Guy Liddell Diaries (MI5) as he was suspected of being a spy during WW2. His work for the war effort is well documented in aircraft journals because he constructed a secret air strip as well as aircraft hangars on his property in Hampshire known as Marwell Hall (once belonging to King Henry VIII). From here he helped to convert Sea Fire aircraft to Spitfires. The aircraft flew test flights, using mainly female test pilots,  at  Marwell Hall's  secret airstrip which was well away from the frequent bombings in Southampton (Eastleigh) where the Aircraft Company he managed (Cunliffe-Owen) was located.


Despite the wealth of information I was able to find about my uncle Rex's life, I knew relatively little about his earlier years and I suspected from the information I had already discovered, that there was much more to his interesting life story.  Then I found an entry for him in the Kelly's Handbook to the Titled, Landed and Official Classes dated 1966, which I almost overlooked because he had changed his name from Rex Morley Hoyes to Rex Morley-Morley. (This followed an earlier name changed whereby he hyphenated Morley and Hoyes thus becoming Rex Morley-Hoyes. If uncle Rex did not wish to leave a trail of evidence about his life, he did not bargain on THIS determined family historian!

FindmyPast has now added Kelly's Handbook the many wonderful records they have on their site. http://www.findmypast.co.uk

I discovered enough tantalizing information to know that I needed to find a 1966 copy of Kelly's Handbook to purchase for myself. After much searching, I finally discovered a copy with Harrowden Books  in High Street, Finedon, Wellingborough, UK. The copy of Kellys' Handbook was described by the book seller as 'red cloth binding with gilt titles and decor  to front and spine. Rear board has 5' long split and remainder is ribbed.....'

The entry for my great uncle on page 1432,  was a wealth of genealogical information. I learned his year of birth in New Zealand and that he was educated at King's College in Auckland and also that he was further educated in the USA. I was furnished with details about each of his marriages as well as the names of the parents of his wives. The listing described Rex's very interesting occupational  history and the various clubs which he was members of, such as the Royal New Zealand Yacht Club, The Royal Cornwall Yacht Club and the Royal Southampton Yacht Club. This information led me on to new line of investigation whereby I discovered that he had owned a number of boats and a large steam yacht named Warrior ( one of the largest of its kind in the world).

I was surprised to learn that in 1947, my uncle Rex was the Air Advisor to the Nizam of Hyderabad, the wealthiest man in the world. This information explained to me why Rex would have felt compelled to offer help to the Nizam when in 1948, India launched an attack on the small province in an attempt to take it over. ( I am certain that there was a monetary remuneration of interest as well).

From information in the Kelly's Handbook, 1966, about my great uncle's involvement in the Royal Automobile Clubs in France and Monaco, I was able to discover that he had listings for residential addresses in countries other than England. One of his addresses was the King George V Hotel, in Paris,  which is the same hotel where Princess Diana and Dodi were dining just before their death. His other addresses included exotic places such as Geneva, Morocco, Bel-Air, and 34 Boulevard Antee, Tangiers. As you might imagine there are new and exciting avenues of research which will arise from this information.

Finding my great Uncle in the Kelly's Handbook of Titled, Landed and Official Classes, was, to say the least, a surprising discovery and a significant one because it eventually led me to knock down a stubborn brick wall and to finally find his death in 1984 under the titled name of Fessenden Charles, R. Morley- Morley Viscompt de Borenden. I am still researching how he came to be known by the name under which he died. There is much more, I am sure, to the intriguing life of Rex Morley Hoyes aka Morley-Hoyes, aka Morley-Morley, aka Viscompt de Borenden. I am currently searching for his fourth wife whom I suspect may still be alive.

Kelly's Handbook is possibly a commonly overlooked family history resource. I would never have expected a man such as my great uncle, born in New Zealand in 1901, to a furniture maker and a dentist, who became a stockbroker before managing a number of Aircraft Companies, who was pursued by MI5 for many years to be listed in a publication of Titled and Upper Classes of England.  Never overlook any resource is now my family history research motto, especially, Kelly's Handbook.

History of Kelly's Handbook to the Titled, Landed and Official Classes

From 1880 this publication placed even more importance on listing the names of members of the British Upper Class. This continued until 1973. Each entry in the Kelly's Handbook, features the main events in the lives of those persons mentioned in the publication. A significant feature for family historians is the wonderful genealogical information to be found with regard to individuals. Kelly's Handbook is well worth a look at. If you are fortunate, as I was, you just might find the key to your ancestor's life in this publication unexpectedly.

PS: I would also like to add a word about The genealogists for Families Project which I am involed in. This project is a su group of  KIVA, a non profit organisation which organises micro loans to peole throughout the world to help them enrich thrie lives with dignity. Have a look at  http://www.kiva.org
You don't have to be a genealogist - you just need to care.