How the 2011 Queensland Flood led me to my Ancestors

I recently spent a month in my home state of Queensland, staying on the Sunshine Coast, north of the capital city of Brisbane. 2010 was an extrememly wet year for Queensland, and January, 2011 was even wetter with heavy rainfall which resulted in flooding in over 75% of the state. I had a number of family members personally affected by these devastating floods which made worldwide news. I watched, as the suburb I grew up in called Jindalee, once again suffered dreadfully as it had done when I lived there in the 1974 floods.
Of course, all of this rain did not make for a great beach holiday and from our balcony on the beachfront in Mooloolaba, we watched the usually calm north facing beach forced to bear the brunt of huge waves,and murky brown water filled with debris washed out from flooded rivers from as far south as the Brisbane river.
By now, you might be wondering how a flood helped me to find ancestors. I have mentioned in previous blogs that a family anecdote states that a great grandfather of mine was washed out to sea at Ballina in northern NSW in 1930, however do not get your hopes up - he did not wash up on the beach at Mooloolaba in 2011. When the flood water finally subsided from some of the roads around us, but we were still cut off from Brisbane and the south of the Sunshine Coast, my husband and I ventured on a drive north to visit the grave of my great great grandparents, John and Hannah Morrison, in the town of Cooroy. We had cleaned the headstone the previous year whilst on holidays and were eager to see how it looked after a year.
Finding many roads still cut off by flood water, we ended up in a small town called Pomona north west of Cooroy and about 30 minutes drive from Noosa Heads. There to our surprise, we discovered the Noosa Musuem and out of curiosity we decided to have a look inside.
There was one lady on duty in the Museum, which is housed in the original old Noosa Council Chambers, which amazingly operated as such until the 1980's. The museum's holdings appeared extensive and included a wonderful and precious room dedicated to the native people of the area, called the Gubi Gubi people (often mistakenly called Kabi Kabi).
The heritage building which now houses an amazing exhibition of the past,is pictured at the top of this page on the brochure for the Noosa Museum.
As we browsed through the rooms holding a variety of displays, I found a small display of material relating to Cooroy. I learned that the town of Cooroy, where my great great grandparents were pioneers, was named after Mount Cooroy, originally spelled Coorooey which was derived from the aboriginal word kurui meaning possum. As I read more about the history of the nearby town of Cooroy, a name in the writing below a photograph lept out at me. It was Morrison. I held my breath as I gazed on the first photograph I have ever seen of my great grandmother and her sisters, standing on the front verandah of the private hospital which they operated at 50 Maple Street, Cooroy. It is also the first time that any of my family have seen a picture of the hospital it 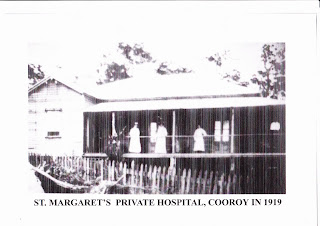 self.
Although we had visited the Cooroy Noosa Genealogical Society, we had found this most precious image of our family in the tiny town of Pomona simply by accident. Flood water had determined our journey that day and had we not been forced to take this detour, I might never have found this treasured photograph. This is the only photograph of any of the Morrison family and I simply cannot believe my good fortune.
Hearing my shrieks of excitement the lady in charge of 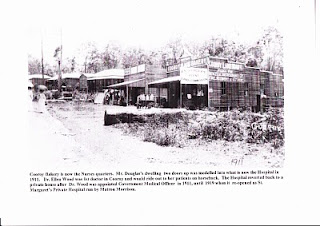 the museum came running ( I am certain, intent on quietening me). When she learned of my discovery, she also became very excited and proceeded to drag large folders of photographs out of a storeroom. We sat down, the three of us, and poured through each huge folder. This time it was the kind lady in the museum who shrieked as she discovered another photograph of the hospital, showing its location in the town. I had known about the hospital run by the Nurses Morrison and Matron Morrison (my great aunt) which was officially called St Margaret's hospital. Amongst locals, the hospital was affectionately called Matron Morrison's hospital.
In another folder, filled with loose papers, I discovered a story written by a Cooroy resident reminiscing about Matron Morrison. It seems that the hospital had a row of mature date palms growing at the side of the building which attracted bats in large numbers. The matron's kindness, which was well known, did not extend to bats, which she detested according to the narrator of the story, as she used to request that several of the town's male residents 'shoo' the noisy bats away or to just'shoot the pests'. Her reasoning was always that they disturbed her patients!
In a 2010 blog, I had mentioned that my great great grandfather, John Morrison had been an owner of the butter factory in Cooroy. Below is the photograph which I took several years ago of the butter factory, which was converted into an arts centre in 2010.
When I mentioned 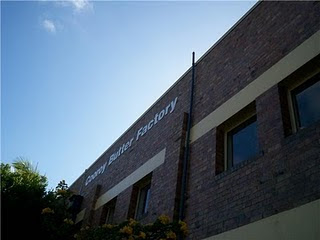 the butter factory and the picture I had taken, a great smile broke over the face of my new friend who worked voluntarily in the museum. 'You won't have seen a picture of the original factory, then?' she aked.
She disappeared into her back room of surprises, and reappeared with yet another huge folder. From it she produced proudly, the photograph below, below right, of the first timber butter factory built in Cooroy in 1910, which was replaced by the brick factory in my photograph, in 1930. The factory which my great great grandfather was involved with was the earlier timber one and I now have a copy of that picture as well, which is shown below. 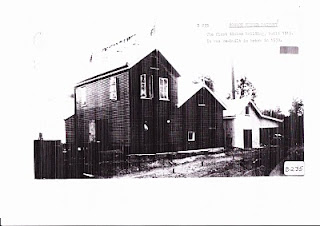 P.S. You might be pleased to know thatwe did finally make it to Cooroy cemetery, where we found the headstone of my great great grandparents, pioneers of Cooroy, John and Hannah Morrison, in as good condition as we had left it the previous year ( pictured below right). 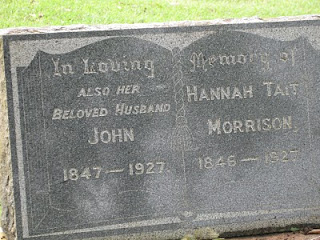